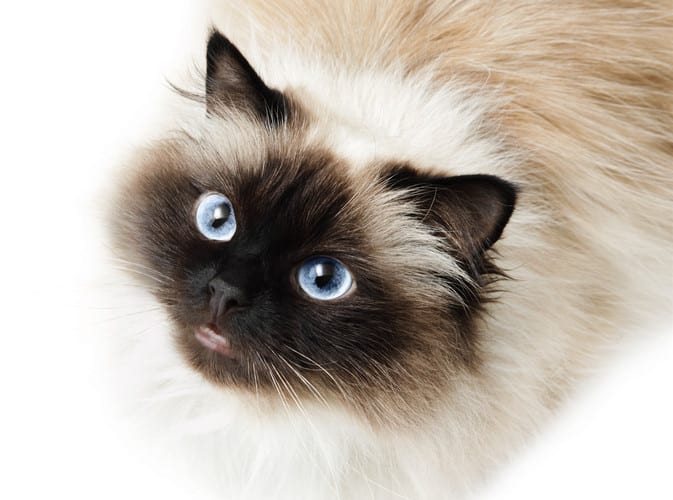 The Himalayan cat is one that possesses an immensely tranquil yet mildly playful disposition. Also affectionately known as a Himmy, this breed is ideal for a quiet, relaxing environment with minimal changes to daily living schedules.

Although Himalayans adores cuddling, sleeping, or practically anything that has to do with lounging about the house, these felines can also have moments of unbound energy. These energy spurts can be random, so these are the best times to get playtime and exercise in through fun games or toys.

In spite of its playful side, Himalayans are often happiest cuddling with its family members and receiving affection from them. Himalayan cats can become very devoted to their family, usually doing best with docile children and dogs.

Loud noises, strangers, and uncertain environments may give Himalayan cats and kittens increased anxiety and cause it to hide in fear. A consistently stable and quiet environment is best for this easily-stressed feline.

This sweet and cuddly cat may often be seen sleeping the day away from its favorite couch or playing with its favorite toy from time to time. 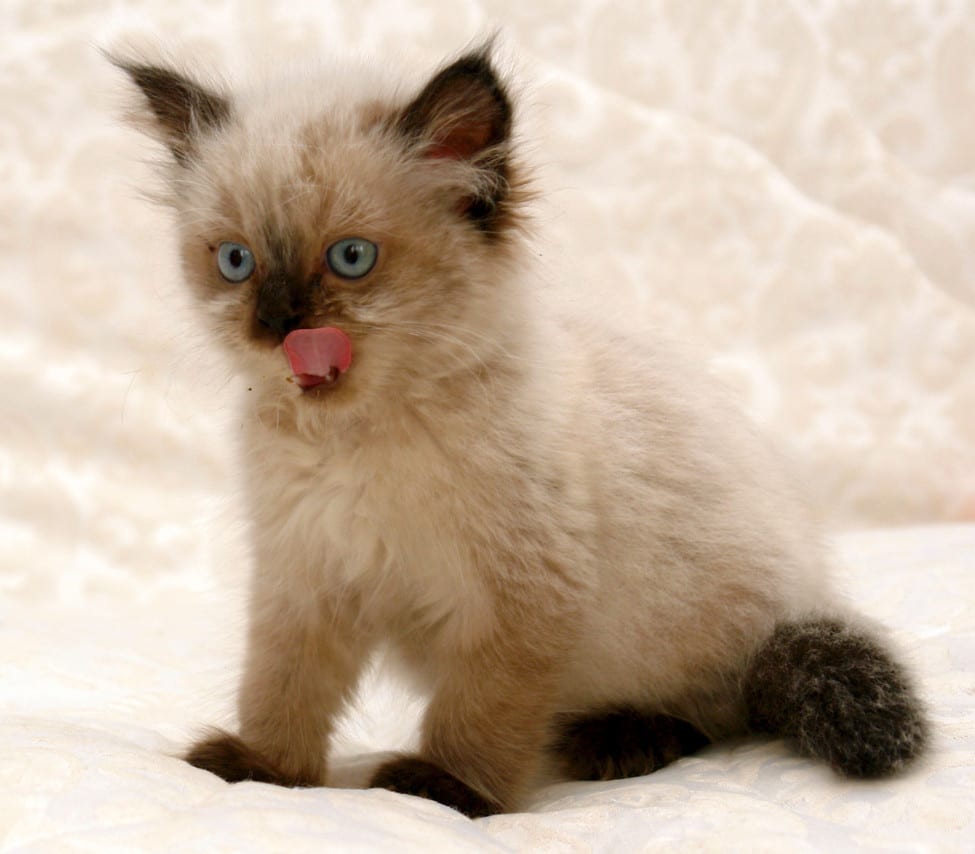 Due to its hybrid status, this gorgeous feline shares outward characteristics that are a mix between the Siamese and Persian cats.

In its coloring and eye color, the Himalayan bears a resemblance to the Siamese cat. However, in every other aspect of its appearance, it looks like a Persian.

These fairly large felines have full, strong bodies and even fuller coats of long, silky hair. Their coat can make them appear bigger than they actually are.

Their head features beautifully rounded blue eyes, small pointed ears, and a button nose that may be either long or scrunched up against its face. Its cheeks are full and fluffy.

Some Himalayans have full, plumed tails while others have the long and skinny Siamese tail. The legs are usually a bit stubby and short, which gives this feline a stocky appearance.

The height of Himalayan cats is typically between 10 and 12 inches tall and are usually on the long side in terms of length. The muscular and stout males may be up to 14 pounds in terms of weight, while the females usually stay between 7 and 11 pounds. 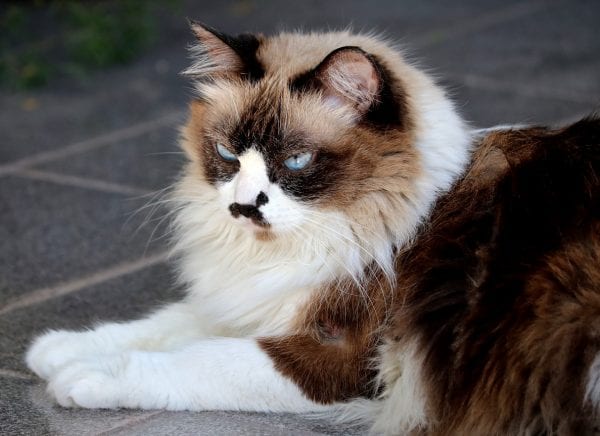 The body is usually either a fawn or white colored with pointed or lynx variations (tortie, chocolate, lilac, seal, red, etc.). The possible color variations that may be seen are practically endless.

These fabulously furry and fluffy felines have become quite popular all over the world as the years have passed. Because of this, there are some interesting facts that have surfaced about these lustrous felines. 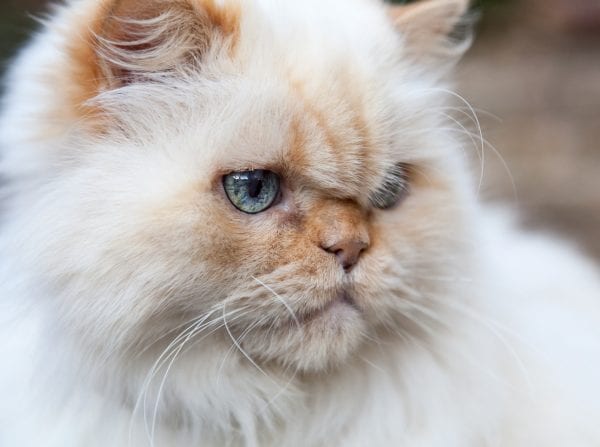 This crossbred feline has its beginnings at Harvard University in the 1930s. Virginia Cobb and Dr. Clyde Keeler, both researchers and breeders, decided to attempt developing a cat that had the pointed coloring of a Siamese and the bodily features of a Persian cat.

The two researchers successfully produced a hybrid that resembled a Persian yet also featured those stunning blue Siamese eyes and the pointed coat markings. After about 15 years had passed, breeders in England took an interest in more fully developing and spreading the Himalayan breed.

This effort culminated in Himalayans being formally recognized by the Cat Fanciers Association (CFA) in 1957.

By the 1960s, Himalayan cats and kittens were being touted around towns, cities, and cat shows as the beloved breed it still remains to this day.

Unfortunately, high-shedding cats like Himalayan tend to be the worst for people with allergies. This means a Himalayan cat is not hypoallergenic. Because of their long fur and frequent shedding, they spread allergens everywhere. Learn whether or not the Russian Blue cat is hypoallergenic. Of course, only a hairless cat can be truly hypoallergenic, but some feline breeds have less dander than others.

Because if its lustrously long coat, Himalayans need daily, intensive brushing. This will not only keep excessive shedding down to a minimum, but it will also ensure that its coat remains free of pesky tangles and mats. Hairballs are also common, so daily maintenance of its coat will help with this.

Similar to how it is with every pet, Himalayans require high-quality kibble that is nutritious. Kibble that is aimed at controlling weight may be ideal, given the fact this feline tends to be on the inactive side. Kibble formulated to help break down and reduce hairballs is also recommended. 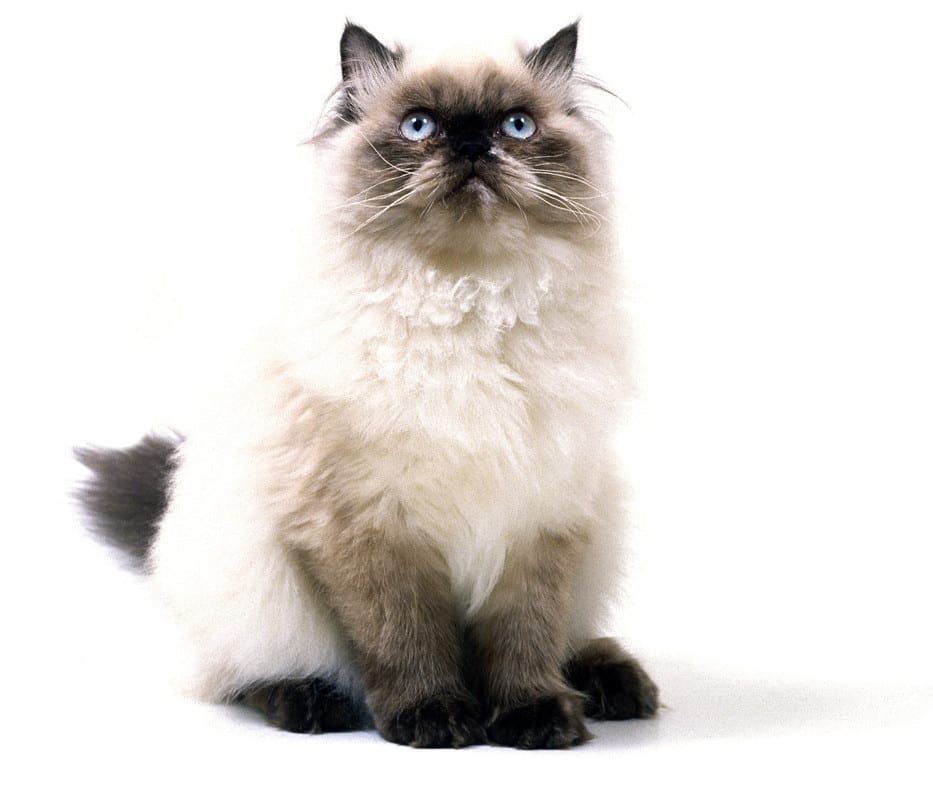 Besides occasionally checking its ears for mites or other parasites, it is recommended to do routine brushing of the teeth. The Himalayan’s flatter face can easily house tear deposit build-up. This should be gently wiped away as needed.

The Himalayan cat lifespan can range between 9 and 15 years.

In spite of this, Himalayans are known to have quite a few notable health concerns, some of which are strictly due to genetics while others are more circumstantial in nature.

Most notably, due to the fact that this particular breed of cat is brachycephalic (they usually possess short, flat noses), it is not uncommon to see breathing difficulties, eye problems, and malocclusions (improper bite or crooked teeth). 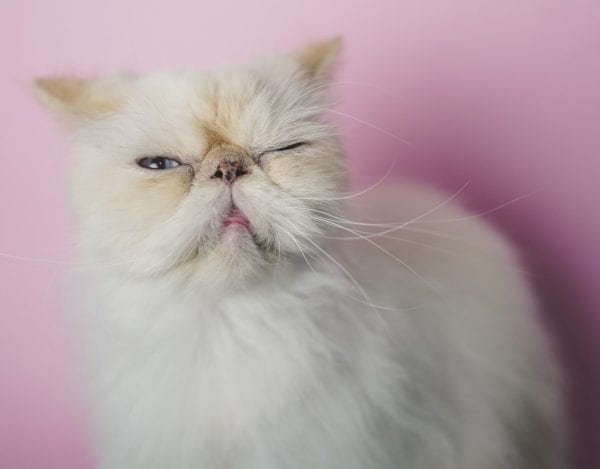 Besides these significant problems, other health conditions that may arise within this crossbreed are listed below:

The best way to keep any cat healthy is to continually monitor it for any abnormal or uncharacteristic changes. If any are seen, it is always good to get it checked out by a reputable vet. Taking it to routine check-ups at the vet is also a good practice to adopt.

Above all, giving it a happy, loving environment to live in is one of the best practices of all.