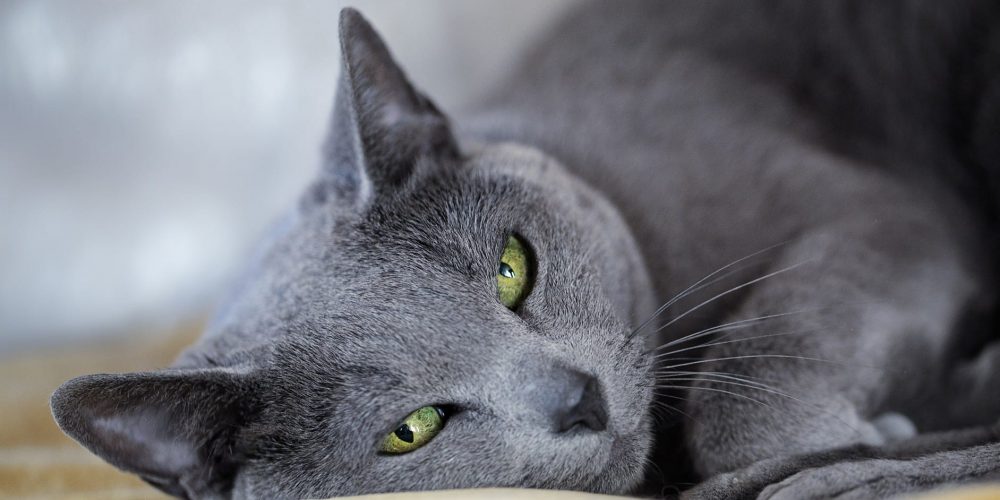 History of the Russian Blue Cat

Believed to have first come from Arkhangelsk, a town in northwestern Russia, the Russian Blue cat breed’s origins are shrouded in mystery. Some claim this ancient breed braved the harsh winters in this port city before being introduced to Europe in the mid-1800s. Others share folklore of these felines gracing the palaces where Russian czars once resided.

In spite of the Russian Blue’s exact roots remaining mostly unknown, it began garnering attention in the United States after World War II came to a close. From that point onward, this breed began capturing the hearts of millions, becoming a beloved breed across the country.

There are many fascinating facts about the Russian Blue breed. However, one of the most interesting is that this breed’s introduction into European society took place in 1875 during a royal exhibition put on by Queen Victoria and Prince Albert of England.

Since it had been brought down from the Archangel Isles of Russia, this cat was first displayed as the “Archangel Cat” at the Crystal Palace exhibition.

These felines are born with peculiar stripes in their fur which are known as ghost stripes. As these felines age, the strips begin to disappear.

As World War II began to take hold of the world, breeding practices for felines were mostly put on hold. Because of this pause in breeding, this breed was almost lost in the chaos of the war.

Thankfully, once normalcy returned after the end of the war, breeders from Scandinavia and England began to resurrect this breed. This time, the cat was bred with the Siamese breed. The result of this hybrid is what is known as the Russian Blue today.

The Russian Blue breed boasts of a personality that is dignified, well-behaved, and observant. These cats adore their family members and displays unmatched loyalty toward those it trusts. Conversely, this breed can appear standoffish and cautious around strangers.

Oftentimes, this cat will be content following its owner around the house or sitting close by. These cats may even be a little intrusive in some cases, but owners should keep in mind the cat does this out of affection for its loved ones.

This cat possesses intelligence and a good memory, both of which allow it to stick to a particularly strict routine. If any changes occur during its normal routine, this breed is sure to show its disapproval. Because of this, this breed is not known for its adaptability.

Even with its quirks and idiosyncrasies, this feline possesses a child-like streak that is always up for playtime and games. This makes this breed both kid friendly and dog friendly.

Due to their athleticism and high energy levels, this cat can be seen climbing and jumping around the house if boredom sets in. 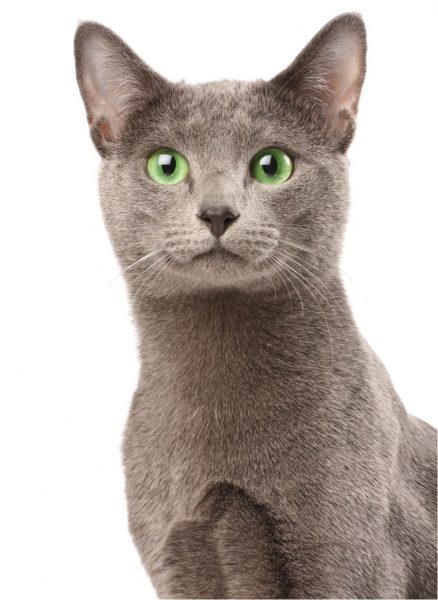 The appearance of the Russian Blue, with its pale jade green eye color and luxurious double coat, is quite striking. Its plush, dense coat is a silvery-blue color that often shimmers under light. This adds an exotic tinge to their already unique look.

This breed possesses a medium build that is strong yet slender. Even though its bones are quite small and fine in size, this breed can weigh between 8 and 15 pounds. This is due to its ample muscle mass.

Its wedge-shaped head, wide set pointed ears, and elongated nose are telling of its Siamese ancestry.

Although it is quite athletic, this breed appears graceful and nimble in both its gait and overall demeanor.

Is the Russian Blue Hypoallergenic?

This breed’s thick double coat was developed to keep the warmth trapped under its coat in the frigid climates of Russia in centuries past. In the present day, this thick coat remains useful, in that it keeps allergens close to its skin and away from those around it.

Because of this, the Russian Blue is a hypoallergenic breed. While no breed is completely hypoallergenic, it can at least keep a majority of allergens out of the air and away from those that would be otherwise exposed to it. This breed is ideal for people that suffer from pet allergies of any kind.

Caring for the Russian Blue Cat

When it comes to shedding, this breed does it moderately. All that is needed for this breed is a comb-through every few days or so. This will keep its coat shimmering and healthy.

Although this breed loves its alone time throughout the day, it can often be playful and active. It is recommended that a cat tree of some sort be installed for this cat, given their tendency to climb and jump. This is a good way for them to let off pent-up energy and keep them off of nice furniture.

Activity is especially important for this breed due to the fact it is predisposed to becoming obese.

It is crucial to not over-feed this breed through regular meals or additional treats. These cats are known to easily gain an excess of weight, which can be very unhealthy. Therefore, food that is formulated for managing weight is recommended in addition to a regimented eating schedule and limited treats. 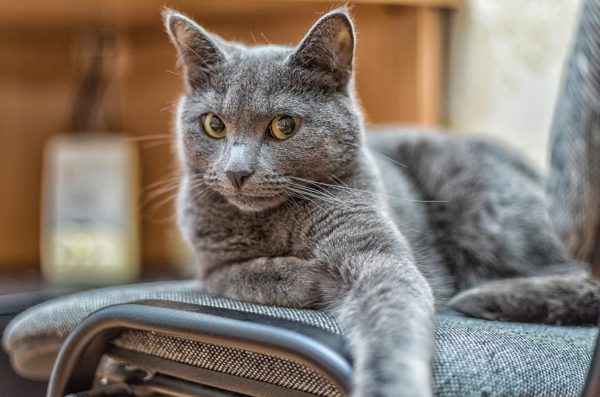 The Russian Blue breed, overall, is healthy and strong. Because of this, these cats often live long lives, with an average life expectancy on average of 10 to 15 years. Some cats within this breed live beyond this, with some reaching the age of 20.

While every cat may develop health conditions during its life, this breed is not known for any significant health issues particular to them besides obesity.

It is always recommended to explore options for getting a cat from no-kill adoptions and rescues rather than pet shops. There are thousands, if not millions, of felines living in animal shelters that need a home.

Sadly, many shelters begin to kill off the animals that never get adopted. Therefore, it is crucial to support no-kill shelters and rescues by adopting from them.

It is also easier on the wallet considering that adoption fees are vastly less expensive than the price of purchasing a cat from a pet shop. Anyone who has a Russian Blue, knows how smart they are, but if you want to check out more smart cat breeds, we add them to MeowWiki all the time!