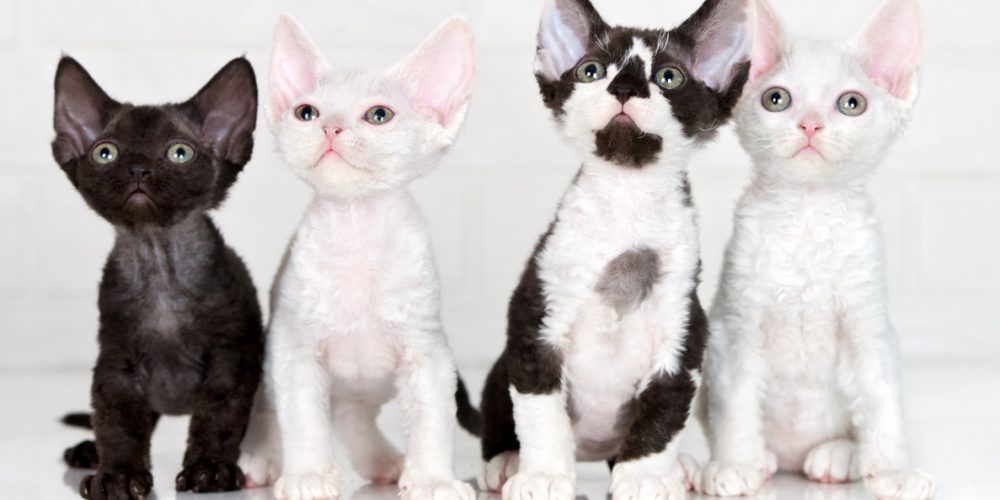 The Devon Rex is a fascinatingly unique cat that resembles a mischievous imp in more than one way. These felines have an intriguing temperament that is almost human-like. 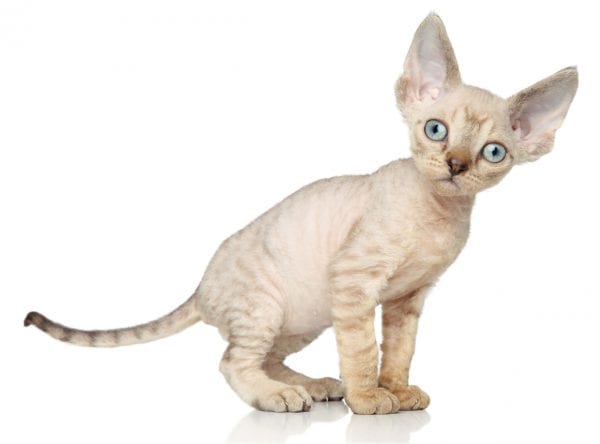 The Devon Rex thrives on human companionship and socialization. It often wants to be part of anything and everything going on in the home. One should not be surprised to find this pixie of a cat in beds, under covers, or following them around closely.

Because of this, these cats do not do well if left alone for long periods of time. They need constant companionship and attention. Luckily, this feline not only gets along well with children, but with dogs, cats, birds, and other species of animals.

Many adore the Devon Rex for its good-humored nature and its ability to bring joy or laughter to any situation. It often puts on shows for its family.

This breed is highly active and attentive. Its observant tendencies combined with an innate intelligence often aid in it learning how to manipulate its unsuspecting owners or figure out complex puzzles. This feline will also need plenty of room to run around or play.

The appearance of the Devon Rex is one of the most captivating aspects of the breed. Many feline enthusiasts are drawn to the cat’s unique look.

This small- to medium-sized animal possesses an appearance that is quite unlike any other breed of cat. Its triangle-shaped head features large alert eyes and ears that are even larger.

The Devon Rex’s ears are quite noticeable because they sit low on the head and are, quite literally, enormous. The features of its face alone give it an alien or otherworldly look.

Besides this, the Devon Rex has a lanky, slender body that is covered in a coat of short wavy hair. Its coat tends to develop over time, ranging from velvety curls to thin downy wisps of hair. Many of these felines have bald spots due to the fragility of their hair. 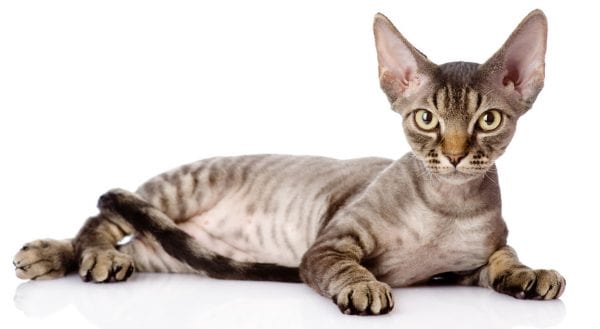 How Big Can It Get?

Though its shades and patterns vary, the colors below are most frequently seen on Devon Rex cats:

Although other colors may be seen, there is only a specific set of shades that are formally recognized by cat associations. 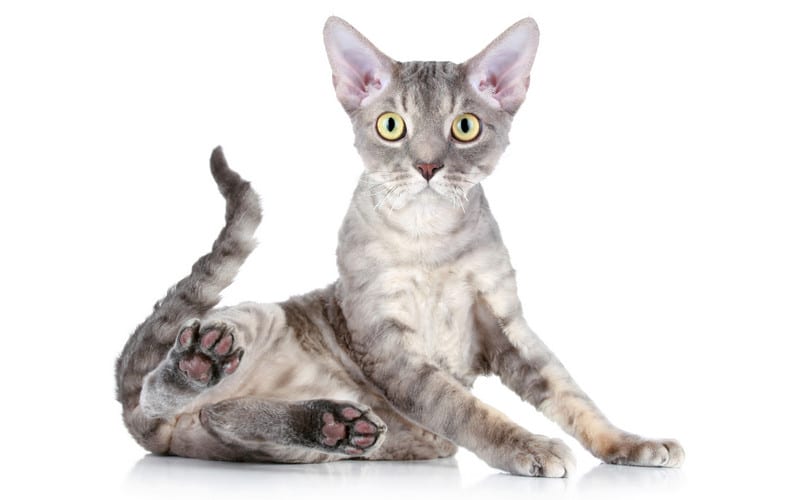 Is The Devon Rex Hypoallergenic?

The Devon Rex’s thin, usually sparse cover of curls often leads people to believe their coat is hypoallergenic. Disappointment is often apparent when feline lovers discover this is not the case. Although some people find the Devon Rex does not cause allergies as severe as other breeds, it is still incorrect to classify these felines as hypoallergenic.

Below are some fun and interesting facts about this elf-like kitty: 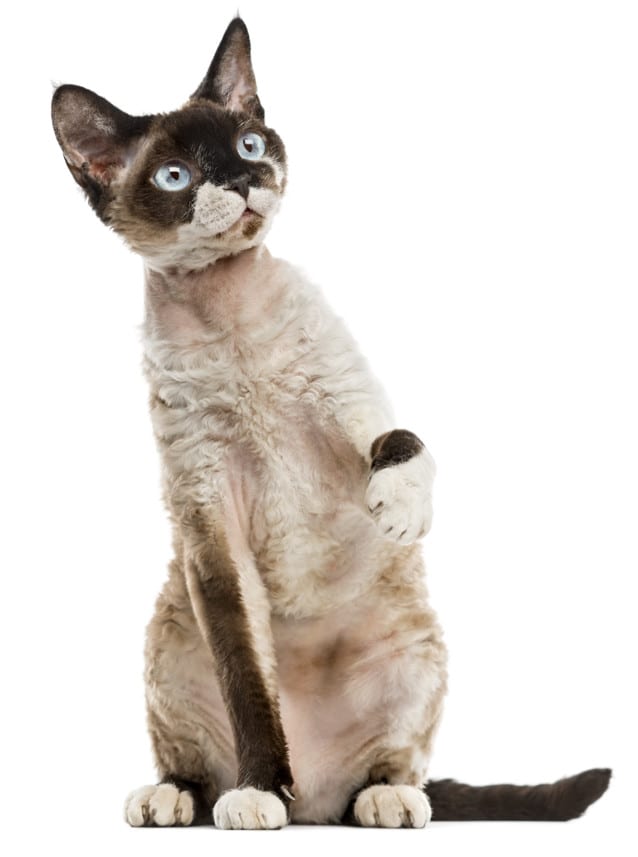 This Devon Rex is closely related to another breed of cat—the Cornish Rex. Many people often confuse the two cats, but there are key differences. The Devon Rex has larger ears that are set lower on the head, shorter whiskers, and more muscular legs. The Cornish has longer legs, a smaller waist, a larger chest, and a finer coat.

Other differences include a slightly longer lifespan for the Cornish and lower grooming needs for the Devon. Both breeds are intelligent, active, and friendly and make wonderful family pets.

Originating in Devon, England, the Devon Rex was not developed until the 1960s, after an unsuspecting woman named Beryl Cox discovered a peculiar-looking stray cat wandering around a tin mine. Cox decided to breed the cat with another that had straight hair. This produced another curly-haired feline. Before long, a whole family was residing around the tin mine.

After these felines were brought to the attention of breeders, it would not take long before the felines were being professionally bred. By 1968, the Devon Rex made its debut in the United States. Less than 10 years later, cat associations all over the country were officially recognizing this sprightly cat as the Devon Rex.

Care Recommendations for the Devon Rex

Most owners are surprised to learn that brushing is not recommended for the Devon Rex Its coat can be extremely brittle, so brushing the coat will make it sparse. Therefore, it is recommended that its coat be occasionally wiped down gently with a cotton cloth.

This breed may also be given baths if its skin feels greasy or oily due to its flimsy hair. Aside from this, frequently checking its ears for dirt or mites, brushing its teeth, and keeping its nails tidy are all beneficial practices to adopt.

The athletic Devon Rex burns a lot of energy, so these cats need a good diet to supplement its activity levels. It is also important to allow it to exercise frequently by giving it ample space to play and explore. Treats should be given sporadically to help keep its weight within a normal range. 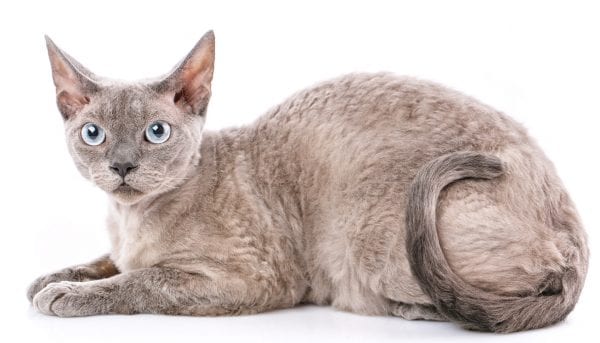 Because this feline has such a thin coat covering, it is prone to bad sunburns. Care should be taken to keep direct sun exposure to a minimum.

Although the Devon Rex’s average lifespan ranges from 9 to 15 years old, some cats belonging to this breed can live even longer. It can be said this breed is quite resilient.

Even so, there are several distinct health concerns that Devon Rex owners should be aware of:

Although it is encouraging to realize this breed has minimal health concerns, it is smart to be aware that no cat is exempt from them altogether. A nutritious diet, drinking water to prevent kidney disease, frequent exercise, and a loving, affectionate home often provide any animal with a solid foundation for a life of healthiness. If a cat drinks too much water, be sure and get a blood glucose test for feline diabetes.