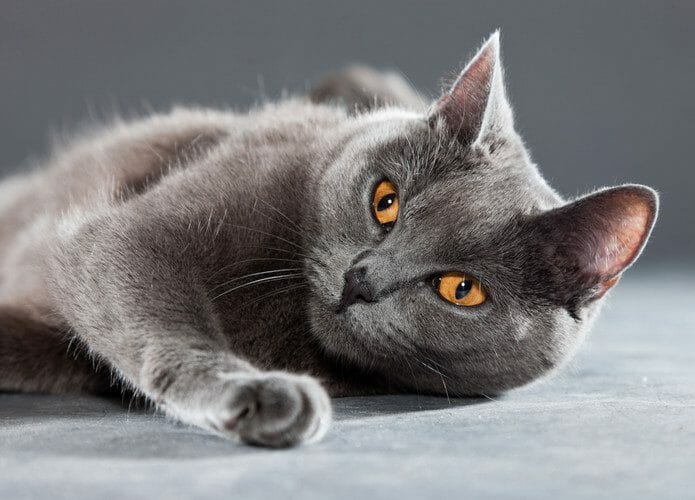 The rare Chartreux cat is large and muscular. Originating in France, the Chartreux is known for its thick blue water-resistant coats and smile. These prized hunters are popular with farmers. One interesting fact is that all French pedigree cats have an official name that indicates their year of birth. This means that any Chartreux born within a given year will have an official name that begins with the same letter. Each year, the letters will rotate, omitting K, Q, W, X, Y, and Z. For example, a cat born in 2022 would have a name beginning with the letter T. 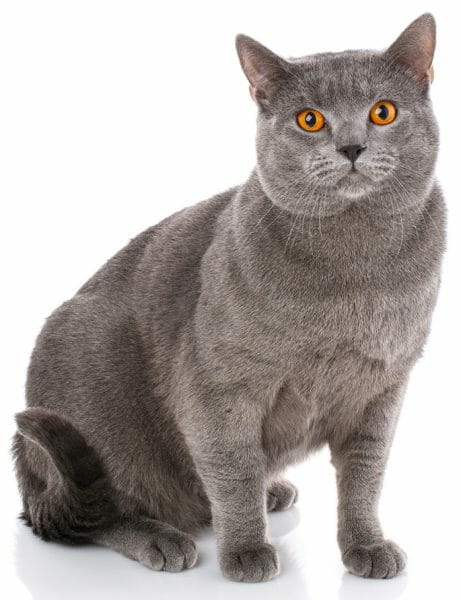 There are various stories telling how the Chartreux found its way to France. One legend claimed that Carthusian monks brought the cats to their monastery in the Chartreuse Mountains near Grenoble. However, this has since been denied by the Prior of the Grande Chartreuse. Another possible origin of the breed is that they were feral mountain cats from Syria that were brought to France in the 13th century by the returning Crusaders.

A poem written in 1558 by Joachim du Bellay entitled “Vers Français Sur La Mort d’un Petit Chat” (translated as “A Small Kitten’s Death”) mentions these cats for the first time. In 1747, the breed was featured in a painting of Magdaleine Pinceloup de la Grange by the artist Jean-Baptiste Perronneau. Soon after, the Chartreux was referenced by the French naturalist Georges-Louis Leclerc, the Comte de Buffon.

Following the Great War, numbers began to dwindle. By the end of World War II, the breed had declined further. Efforts made soon after by European breeders prevented extinction. To save the Chartreux; Persians, British Shorthairs, and Russian Blues were all used to prolong the life of the breed.

First introduced to the United States in 1971, the breed achieved championship status with the Cat Fanciers’ Association (CFA) in 1987. Notable owners of the Chartreux have included the poet Charles Baudelaire, the novelist Colette, and French president Charles de Gaulle. 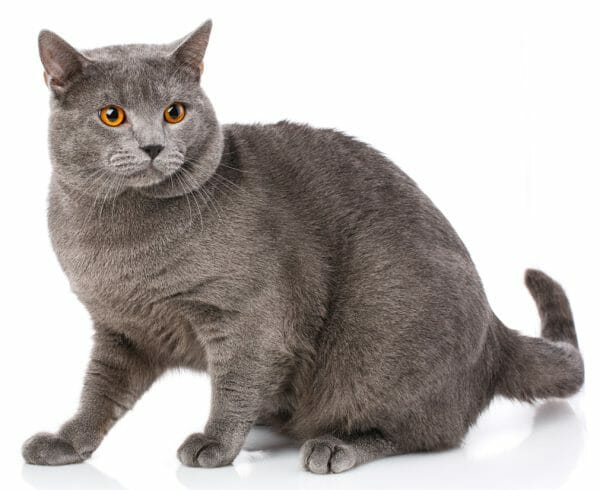 With a powerful, sturdy body coated in thick blue water-resistant fur and orange eyes, the distinctive Chartreux is a beautiful cat.

Broad-shouldered and robust with a deep chest, these felines do not reach maturity until they reach 4 or 5 years of age. Although they can weigh up to 16 pounds, these cats are agile and supple.

The Chartreux’s medium-short wooly coat is thicker on males than it is on females and younger cats. Their coat is always a blue-gray shade, and the tips of their hairs have a slightly silver shine. Kittens may appear to have faint tabby markings and tail rings. However, as the cat reaches maturity, the tone should be bright and even.

Heads are rounded with full cheeks, gray noses, blue lips, and a distinctive smile. Their ears sit high on their heads. 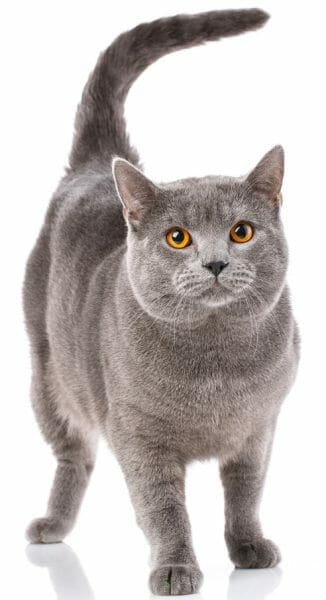 The Chartreux could be compared to a mime artist. Silent and playful, these curious felines enjoy short bouts of play and often engage in silly and entertaining behavior. When not playing, these cats love naps interspersed with meal breaks. With a penchant for chasing, it is possible to keep a Chartreux entertained using lure toys. They may even perform tricks such as backflips.

Although they do not demand attention, these cats appreciate affection from their owners and enjoy having their heads, ears, and chins stroked. When not sleeping at its owner’s side, the Chartreux may also follow them from room to room.

Aside from the occasional chirping sound, communication is largely nonverbal. It is therefore important to become familiar with the cat’s typical behaviors as it is unlikely to ever let you know when it is in discomfort.

When greeting new guests in the home, the Chartreux will usually patiently wait before deciding whether to make an introduction. Their calm temperament means this cat can be left for long periods and will get on well with other animals in the home. 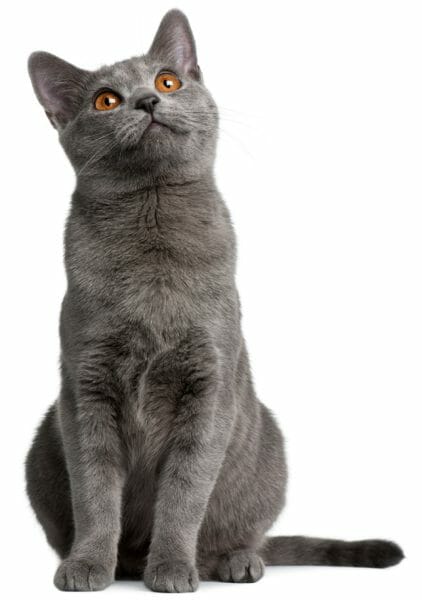 Is the Chartreux Cat Hypoallergenic?

Chartreux are moderate shedders, with heavier shedding occurring during the change of seasons. Although the amount of fur a cat sheds is often regarded as an indicator of whether it is hypoallergenic, the truth is that it is more to do with the production of dander and Fel d 1 (a protein found in saliva). The Chartreux has notably light dander, which floats in the air rather than sticking to surfaces. This means that these cats are generally not suited to allergy sufferers.

Although most Chartreux are healthy cats, owners should be aware of a few common concerns that can affect the breed. These include kidney disease, urinary tract infections, and luxating patella. 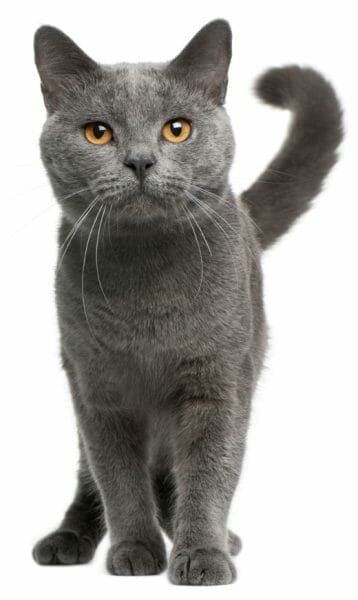 The exact lifespan of a Chartreux will depend on genetics and lifestyle. The average for the breed is between 11 to 15 years. Regular visits to the vet and providing recommended vaccines (such as those for rabies and distemper) help promote good health. Another suggestion is to provide preventive medication for fleas, ticks, and heartworm.

Although it may be possible to find a Chartreux cat for sale, adoption is always the best route to ownership. When looking for a suitable rescue center, be sure to use a no-kill shelter that never euthanizes healthy animals.