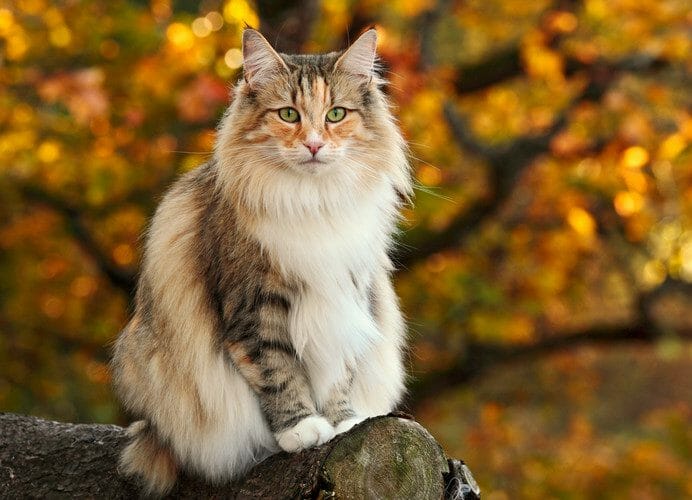 The Norwegian Forest Cat is a domestic feline breed that originates from Northern Europe. Known as Norsk Skogkatt in their native Norway, the breed has adapted well to living in very cold conditions by developing a long and glossy topcoat that sheds water. This is accompanied by a thick and wooly undercoat that provides excellent insulation.

During World War II, the population of the breed dwindled. If it was not for a breeding program started by the recently established Norwegian Forest Cat Club, the breed would have become extinct. In the 1950s, the breed was declared to be the official cat of Norway by King Olav V. Two decades later, the breed was registered with the European Fédération Internationale Féline. The American Cat Fanciers Association followed suit in 1994. In addition to Norway, the breed is also popular throughout the rest of Scandinavia and France. 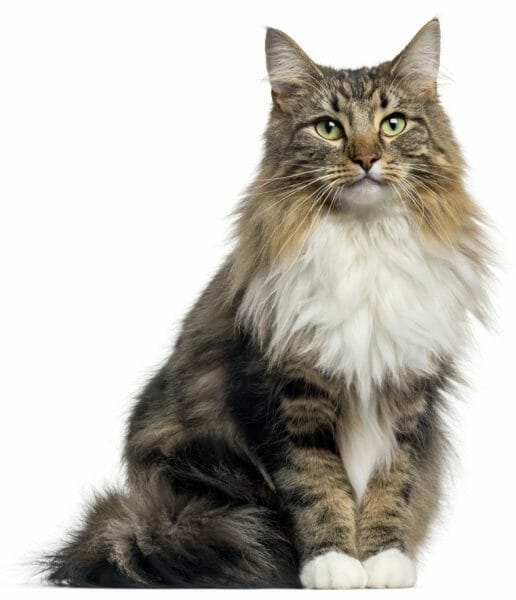 Although larger than the average cat breed, the Norwegian Forest Cat is quite athletic. These muscular felines usually weigh between 12 and 20 pounds. Recognizable by their big bushy tail and a thick coat of fur, they often appear even larger than they are.

The average weight of a domestic feline is between 8 to 12 pounds. This means that even the smallest of the breed is equal in size and weight to the largest example of another breed.

Over the centuries, the breed has adapted well to the harsh conditions with the dense undercoat keeping them warm. However, they will require continual brushing to stop the fur from becoming matted. During the spring, the winter undercoat will start to molt.

Norwegian Forest Cats can be found in a variety of patterns and colors, as listed below. 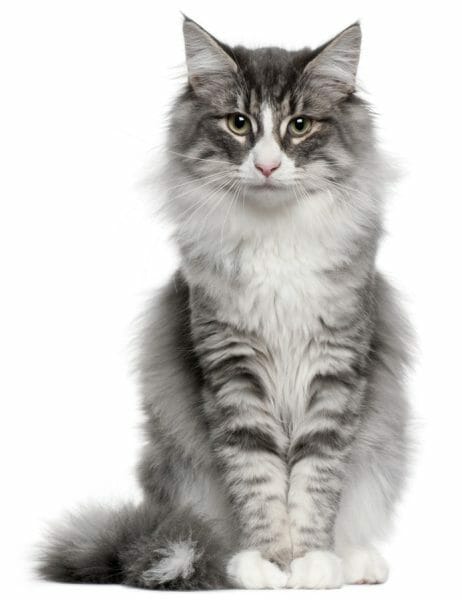 Norwegian Forest Cats crave affection and attention from their human owners. That said, they do not make demands of their owners and will not seek out attention for themselves. Instead, they will wait for their owner to approach them.

These calm and intelligent cats are not known to meow often. However, when they do speak, the sounds they make are more like chirps and do not match their appearance.

These felines fit in well with families of all ages. They are playful and tend to get along well with other animals in the home.

Due to the thick coat of the Norwegian Forest Cat, grooming is important. To prevent matting, brush the feline’s fur at least twice each week. Particular attention should be paid to this task during the spring months when the thick undercoat will start to shed.

When keeping a Norwegian Forest Cat indoors, make sure it has enough room to run around and play. Regular exercise is important to the health of these cats. MeowWiki recommends providing toys and cat trees to promote activity.

Although these cats can be easily toilet trained, an adequately sized litter box must be provided as Norwegian Forest Cats are larger than most other felines.

The Norwegian Forest cat lifespan is approximately 14 to 16 years. Although generally a healthy breed, it is important that owners are familiar with some of the conditions these cats may be genetically predisposed to, including hip dysplasia, luxating patella, hypertrophic cardiomyopathy, skin diseases, and glycogen storage disease type IV.

Regular visits to the veterinarian will ensure proper screening for these conditions. In addition, these felines should receive regular check-ups with a vet and receive all recommended vaccinations, including those for rabies and distemper. Providing preventive medication for fleas, ticks, and heartworm are also advised.