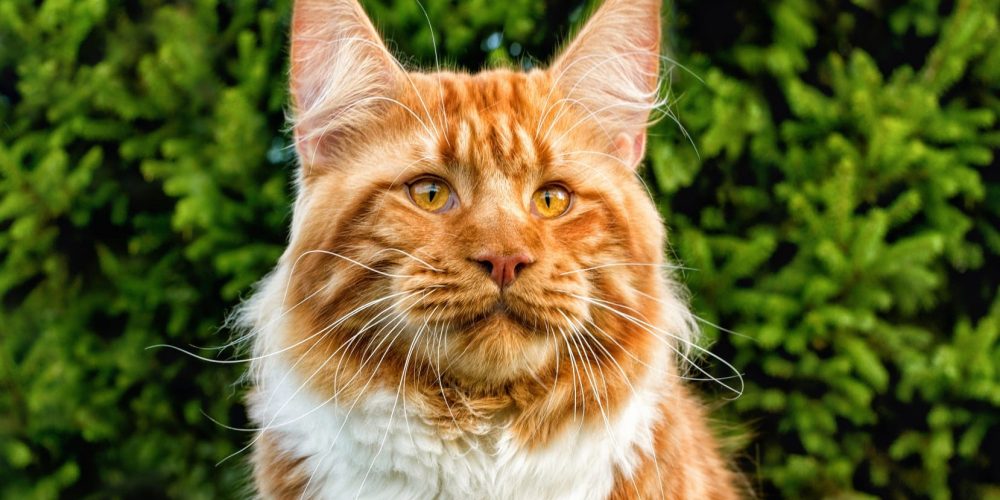 The Maine Coon Breed is numbered among the top breeds of cats in terms of popularity. Categorized as a working breed, this coveted cat is coveted for its adaptability in what it has to offer potential owners. They are also called an American Longhair.

The origins are unclear. Some tell folk tales that the cats are part raccoon, while some claim that the first Maine Coon belonged to French queen Marie Antoinette. The most believable story is that the Vikings brought them over to the New England area centuries ago and they have been there ever since. 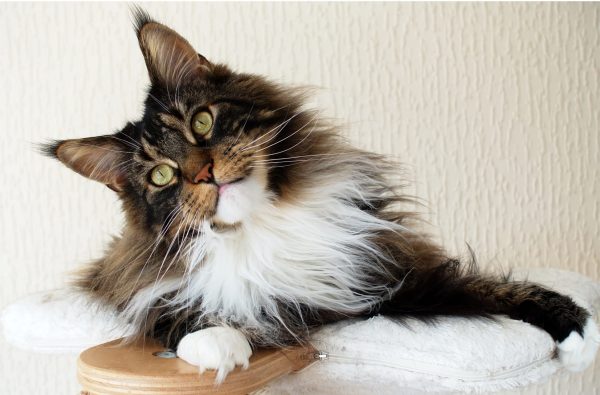 Specifics of the Breed

For this breed, both sexes are considered larger than the average cat. Due to their enormous size, many have given them the title of “gentle giant.”

The average Maine Coon lifespan ranges between 10 and 13 years.

This feline is known for its uneven, disheveled coat. This breed boasts of a beautifully smooth coat that can come in a diverse range of colors and patterns.

The breed has a long, fluffy tail, pointed ears with tufts of hair issuing from them, and large paws that enable them to traverse snow-covered terrain.

Their dense coat, enormous paws, and busy tail make it the perfect cat to have in frigid, snowy climates. 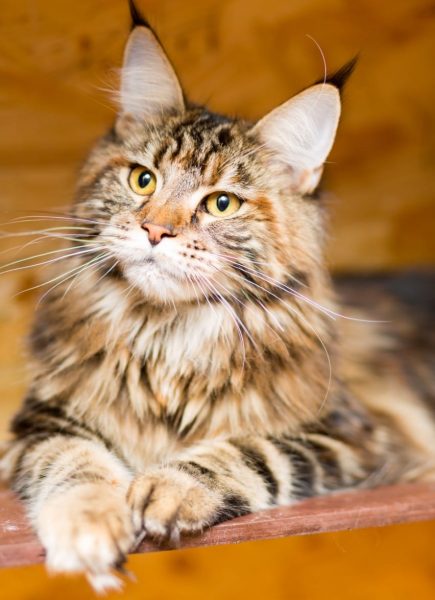 The lovable personality type they tend to possess make it a wonderful option for a family or as a constant companion.

Initially bred to be hunters in centuries past, this specific breed maintains the natural curiosity and intelligence that first enabled them to be good at hunting. Their trainability gives them a dog-like feel.

Even with their past as outdoor hunters, they have behavior and personality traits have evolved. They are now known to be one of the most loving, gentle, and even-tempered of cat breeds. Their love for playtime makes them an ideal option for a family.

The Maine Coon is also known to be on the clingy side with its beloved human. Whether it is the kitchen, the shower, or the bathroom, this breed is content following its owner wherever they go.

One notable trait that the Maine Coon possesses is its love for water. Unlike most cats that bolt at the sight of water, these brave cats have a peculiar love for being in or around water. Many ascribe their fondness of water to their water-resistant coat.

How to Care for a Maine Coon

Due to their coat being of varying lengths, the Maine Coon requires frequent brushing to detangle knots and keep their coat silky smooth. Luckily, this breed loves to be groomed and brushed. Frequent grooming also helps to curb the cat’s moderate shedding.

Because the Maine Coon is a significantly large cat breed, its food intake should be supervised. Otherwise, this breed can easily eat too much, put on excess fat, and become overweight.

To prevent unhealthy weight gain and facilitate the breed’s innate love of adventure, frequent exercise should be done. Playtime should consist of puzzles to keep it mentally healthy and intensive exercise-based games to keep it physically healthy.

It is recommended to buy scratch posts and cat trees for the Maine Coon. This will keep its claws healthy and will occupy its attention for a time. This breed also loves to climb. 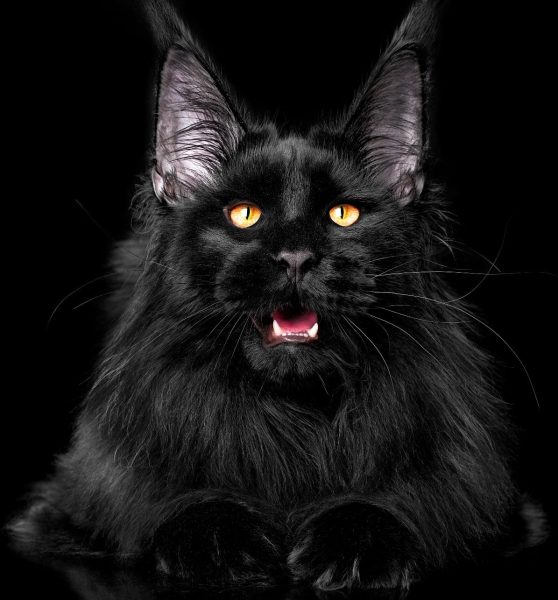 Another excellent means of the Maine Coon getting enough exercise mentally and physically is through training. Teaching the cat new tricks or commands will keep it sharp and agile. This can be a fun, interactive, bond-forming activity between the cat and its owners.

Because the Maine Coon attaches itself to its owners, it should be given a lot of attention and love.

In an effort toward boosting the Maine Coon lifespan, indoor time should include plenty of playtime, loving care, and ample room for the cat to freely run around.

In terms of health issues, the Maine Coon cat is prone to many conditions that are typical for bigger cats that have large bone structures. In the Maine Coon, hereditary diseases are also commonly known to afflict them.

Below are some of the most prevalent health issues for Maine Coon cats:

This condition adversely affects the hip joints, causing weakness, limping, and pain when walking. It can be an inherited condition that slowly worsens over time. Though it is much rarer in cats than it is in dogs, hip dysplasia occurs in 18% of cats belonging to the Maine Coon cat breed. This condition occurs most frequently in big cat breeds.

Maine Coon kidney problems most often are due to conditions like polycystic kidney disease. In this inherited condition, the kidneys slowly begin to fail. This can either be predicted through early screenings during kittenhood or diagnosed as it is happening in old age. Renal failure can be helped through the implementation of a special kidney diet.

The Maine Coon heart disease that is frequently diagnosed is cardiomyopathy. This condition of the heart muscles often goes undetected. Because of this, early screenings should be done to rule out potential heart disease in this breed.

Some common symptoms of cardiomyopathy in cats is a noticeable decrease in appetite, quickened breathing, and weakness.

As one of the most common medical problems this breed faces, spinal muscular atrophy can occur quite early in the cat’s life. This condition targets the muscles which begin to wither and weaken.

If any of the aforementioned conditions are suspected in a Maine Coon, or any cat breed, a vet should be seen as soon as possible for examination and care. Want to know about more breeds of cat, just visit this page we’re updating with more cat breeds every month!