What is Feline Immunodeficiency Virus (FIV)?

Just as humans experience HIV, felines experience FIV. Like HIV, the feline version of the virus can remain concealed for months or even years. In some cases, the virus never progresses to a deadly state. FIV is similar to feline leukemia (FeLV) in how it manifests.

Once a cat is infected by the FIV, the virus never goes away. The cat can simply be a carrier for life. In these cases, the cat lives a normal, healthy life with the virus remaining dormant. In other cases, the virus may take months or years to develop before symptoms start showing up. Once this happens, the FIV becomes an immunodeficiency disease. 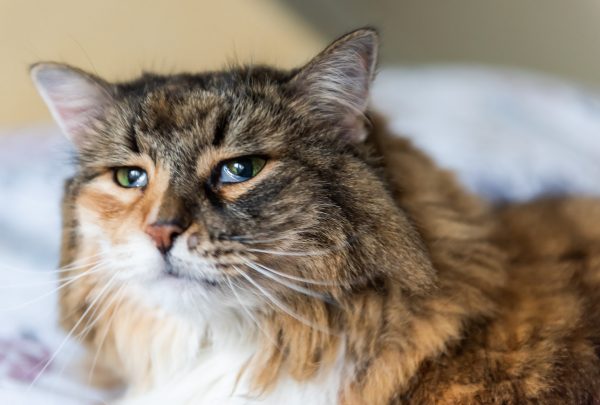 The transition from a dormant to an active virus usually causes a rapid progression in the disease. Normally, an active form of FIV will be lethal to the cat within a year.

When it comes to FIV in cats, life expectancy will depend on the state of the virus. Cats with inactive FIV (which makes up about half of all FIV cases) can have normal lifespans for a cat. On the other hand, about 18% to 20% of cats succumb to the virus within 5 years of diagnosis.

Can Humans Get FIV from Cats?

Feline immunodeficiency virus can affect neither humans nor animals of other species, only other felines. Likewise, HIV is incapable of affecting cats and other animals. Therefore, there is no concern about between-species contamination.

How Do Cats Get FIV?

The most common way that cats get the feline immunodeficiency virus is through bites from infected felines. Saliva is known to carry the disease. For this reason, cats that live strictly indoors and are mild-mannered in nature have miniscule chances of contracting FIV. Always keeping cats indoors is the safest way to keep them from getting an FIV-positive diagnosis.

In most cases, cats that live outdoors or cats that have more aggressive personalities are the ones that tend to get FIV. Any living situation that could land a cat in fights with other cats are susceptible to bite injuries, which could lead to an FIV infection.

In rare cases, a cat could receive an FIV transmission through the milk of its mother. In even rarer cases, FIV could be caught through sexual encounters between cats.

Symptoms of FIV in Cats

In some cats, once the FIV has incubated sufficiently, the virus will become active and will begin producing distinct symptoms. These symptoms will reflect the crippled states of the cat’s immune system as it becomes unable to recuperate after such things as mild infections or the common cold.

One of the tell-tales signs is that the cat appears to take on an almost constant state of illness. Listed here are some of the universal signs of immunodeficiency disease in FIV positive cats:

It is critically important that if any of these symptoms are seen, the cat be taken to an animal hospital or a vet’s office. Although FIV could be the culprit, these symptoms are also seen in countless other illnesses that afflict cats, such as anemia or cancer. A proficient veterinarian will be the best source of information and expertise to consult with concerning a possible FIV diagnosis.

Sadly, many cat with feline immunodeficiency virus are put down because of how FIV ravages a feline’s body. However, some people look to care for and adopt an FIV-positive cat. Cats can live normal and happy lives with FIV, so this should not scare off potential owners. Stray Haven Rescue in St. Louis, Missouri, is one of many cat adoption facilities that have FIV-positive cats available to love and cherish.

Is There a Test for FIV in Cats?

In some cases, the positive test will be a false alarm. However, if the second test reaffirms the positive result of the first test, then the cat will be formally diagnosed with feline immunodeficiency virus. Owners should keep in mind this does not necessarily mean a death sentence. As mentioned previously, cats can live full, vibrant lives as long as the virus remains inactive.

In addition to the ELISA test, blood panels, physical examinations, and urinalysis may also be conducted by the vet. 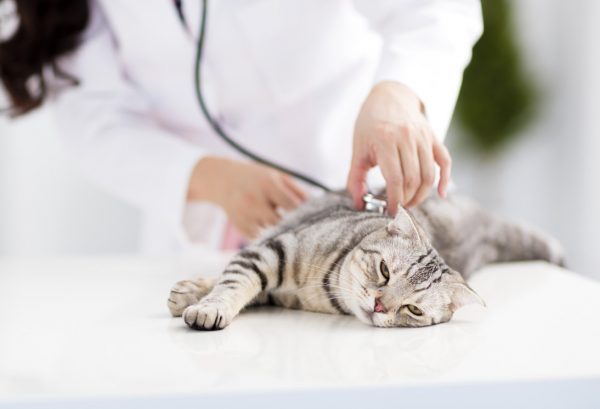 Caring for a Cat with FIV

Once a cat receives a diagnosis of feline immunodeficiency virus, there is essentially nothing else to do for the cat unless it becomes symptomatic. In cases where the virus begins to manifest itself in deleterious ways—such as the development of secondary diseases and infections—care must be taken to address these new developments.

Due to the cat’s weak immunity, cats with feline immunodeficiency virus can easily acquire infections and illnesses. The vet will need to closely monitor the cat’s health and treat these new illnesses on a case-by-case basis.

Does an FIV Vaccine for Cats Exist?

An FIV vaccine was previously available to protect felines against the virus. However, due to its ineffectiveness and tendency to yield false positive results, the vaccine was done away with indefinitely. Some studies have confirmed that an feline immunodeficiency virus vaccine can do the opposite of what it is meant to do—even facilitating the virus’ activity in the body.

When to Put Down a Cat with FIV

In nearly all cases of a FIV diagnosis, a cat will never need to be put down. As mentioned previously, half of all cases remain dormant and even harmless. However, if the virus becomes active, severe symptoms may end up taking a massive toll on the cat, both mentally and physically. In cases of severe, painful end stage FIV, putting down the cat may be an option some owners consider.