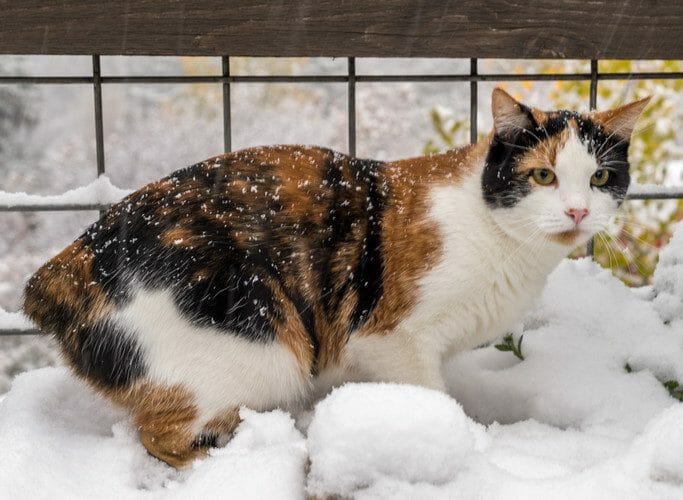 The Manx cat is an established cat breed that gets its name from the Isle of Man off the coast of Great Britain. The Manx is famous for its naturally occurring short tail. Some interesting myths surround the origin of the breed. One story involves how these felines came to be missing their tails. The tale tells of how the Manx cat was asleep when Noah loaded all the animals into his ark. Just as the ark door was closing, the Manx rushed in. Unfortunately, the tail got trapped in the door and was entirely cut off.

Another Manx myth states that these tailless cats arrived on the Isle of Man after swimming ashore after a ship from the Spanish Armada sank nearby in 1588. The notion that these cats originate from Spain is unfounded, as there are no tailless Spanish breeds. No proof of such a shipwreck has been found either. Another claim is that the breed is the offspring of a cat and a rabbit. This is due to Manx’s propensity for hopping and the length of its tail. 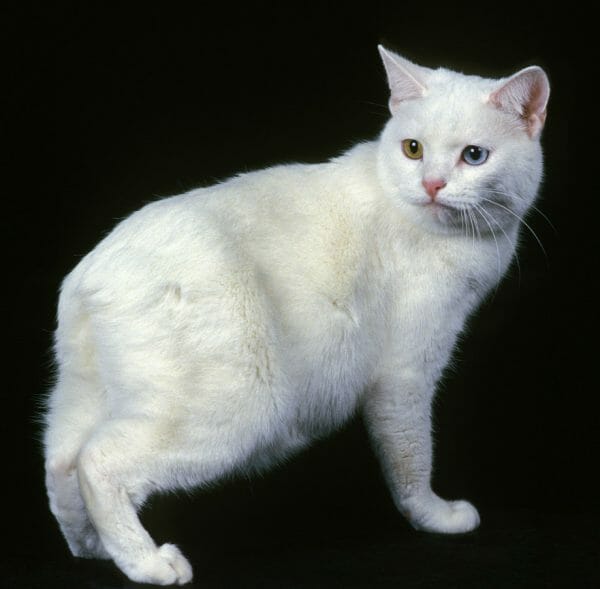 A theory that indicates the probable origin of the Manx involves sailors on trading ships that traveled from Phoenicia in modern day Lebanon to Japan, where they may have used Japanese Bobtail cats as mousers. This brought the breed further west, where it eventually found its way to the Isle of Man, possibly with Nordic sailors. Similar cats are also found in areas such as Cornwall in England and Crimea on the Black Sea. However, no genetic link has been proven.

Since the 1800s, the breed has been exhibited at cat shows. The first Manx to win at such an event was a silver tabby called Bonhaki in London in 1900. Manx cats were one of the first breeds to be officially recognized by the Cat Fanciers’ Association and have been actively bred in the United States since the 1920s.

This even-tempered and relaxed cat is both independent and loyal to its family and enjoys the company of humans. They exhibit a good degree of intelligence and are playful and sociable. Some people claim that the breed behaves more like a dog at times because they react well to verbal commands and enjoy playing fetch.

Commonly used for catching mice and rats on farms and ships, the breed has a strong prey drive, which makes them great hunters.

Multi-pet households and young children represent no issue for the affable Manx, providing they are introduced to the home in a patient and considered manner. 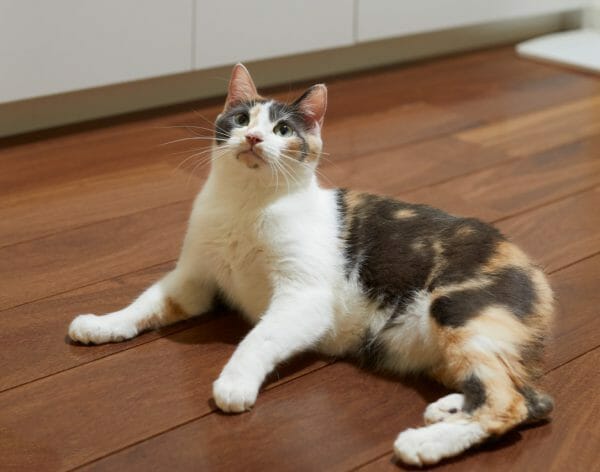 Manx cats are considered to be medium -sized felines. However, they are stocky and have a heavy frame, which gives the impression that the Manx is larger than it is. Males weigh between 9 to 13 pounds, and females weigh between 7 to 11 pounds.

The most notable feature of the Manx cat’s appearance is its lack of tail. However, some Manx cats have a small stump where the tail should be located. While the cat is standing, it is apparent that the hind of the Manx is higher than its front.

The head of the Manx is round, as are its eyes and whisker pads. When viewed from the rear, the ears appear to be rocker shaped.

Although typically short haired, there are some registries that recognize the existence of a longhaired Manx cat as a separate breed, while others include them within the standard definition. 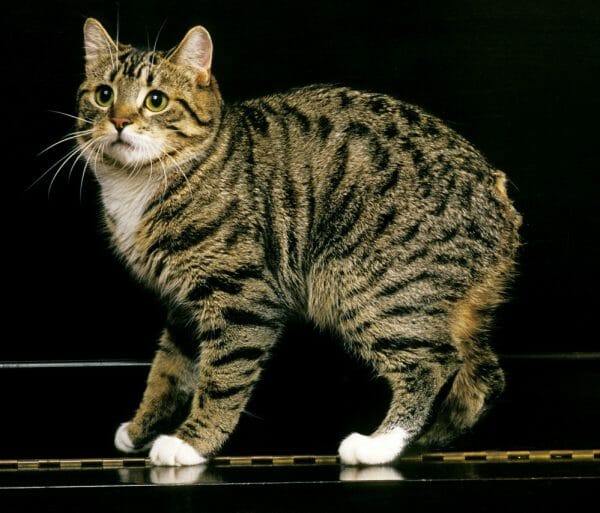 Caring for a Manx Cat

Like other felines, a Manx cat needs a balance of vitamins, minerals, proteins, and fat. along with adequate clean water. Food should contain:

Meat should always be the main ingredient in any cat food. For particular felines, owners may need to heat the food or mix wet and dry food. It is important that cow’s milk is not given to a Manx as the lactose may build up in the intestine leading to digestive problems like feline IBD.

Although the coat of the Manx requires little grooming, occasional brushing (particularly during shedding season) will help maintain its appearance. 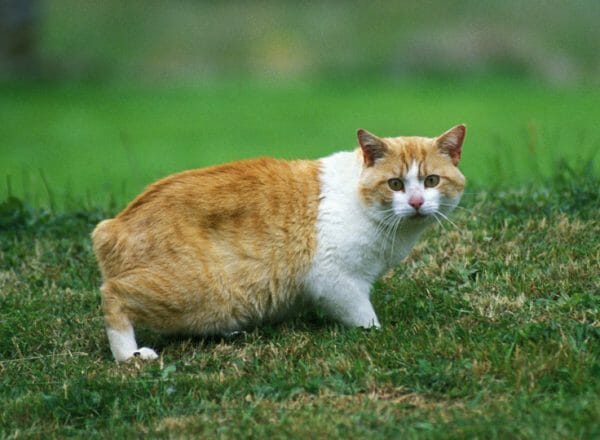 Cats with shortened tails can often inherit deformities at the end of their spines. There are two types of Manx cats. The true “rumpy” variety has a small hollow in the place of the absent tail. The “stumpy” variety has a residual tail.

When there is no tail at all, the cause is a genetic mutation. As a result, several severe associated diseases are collectively referred to as “Manx syndrome.” This condition affects as many as 20% of all Manx cats. The defective gene that is responsible for the lack of tail can cause spinal and neurological problems. When two tailless Manx cats mate, the resulting offspring may be stillborn or die immediately after birth.

Because the body of the Manx is shorter than most cat breeds, it may have a short spine. This shorter spine may affect muscle and nerve endings. This can also cause spina bifida, which is a defect the cat will have from birth. Spina bifida affects a Manx’s ability to walk while compromising the bladder and bowel control.

Although spina bifida cannot be treated, physical therapy can be helpful. Unfortunately, the prognosis for cats with this condition is poor. In some cases, euthanasia is required.

Aside from the spinal problems, the Manx is not particularly prone to any other health conditions. Many live healthy lives enjoying a life expectancy of 9 to 13 years. As with all felines, the Manx should be given recommended vaccinations (such as those for rabies and distemper) and receive regular check-ups at the veterinarian. In addition, preventive medication for fleas and heartworm are recommended. 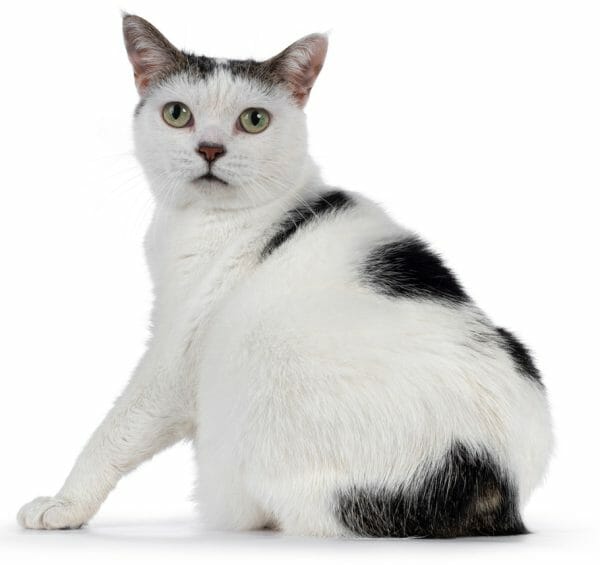 Despite the issues surrounding the breed’s genetics, there are still numerous Manx cat breeders. This means that these cats remain very popular. As a result, many end up in animal shelters. When looking to buy a Manx cat it is important to always check local no kill shelters. Rescuing a cat can lead to financial savings. In addition, adoption centers ensure healthy animals are not euthanized.